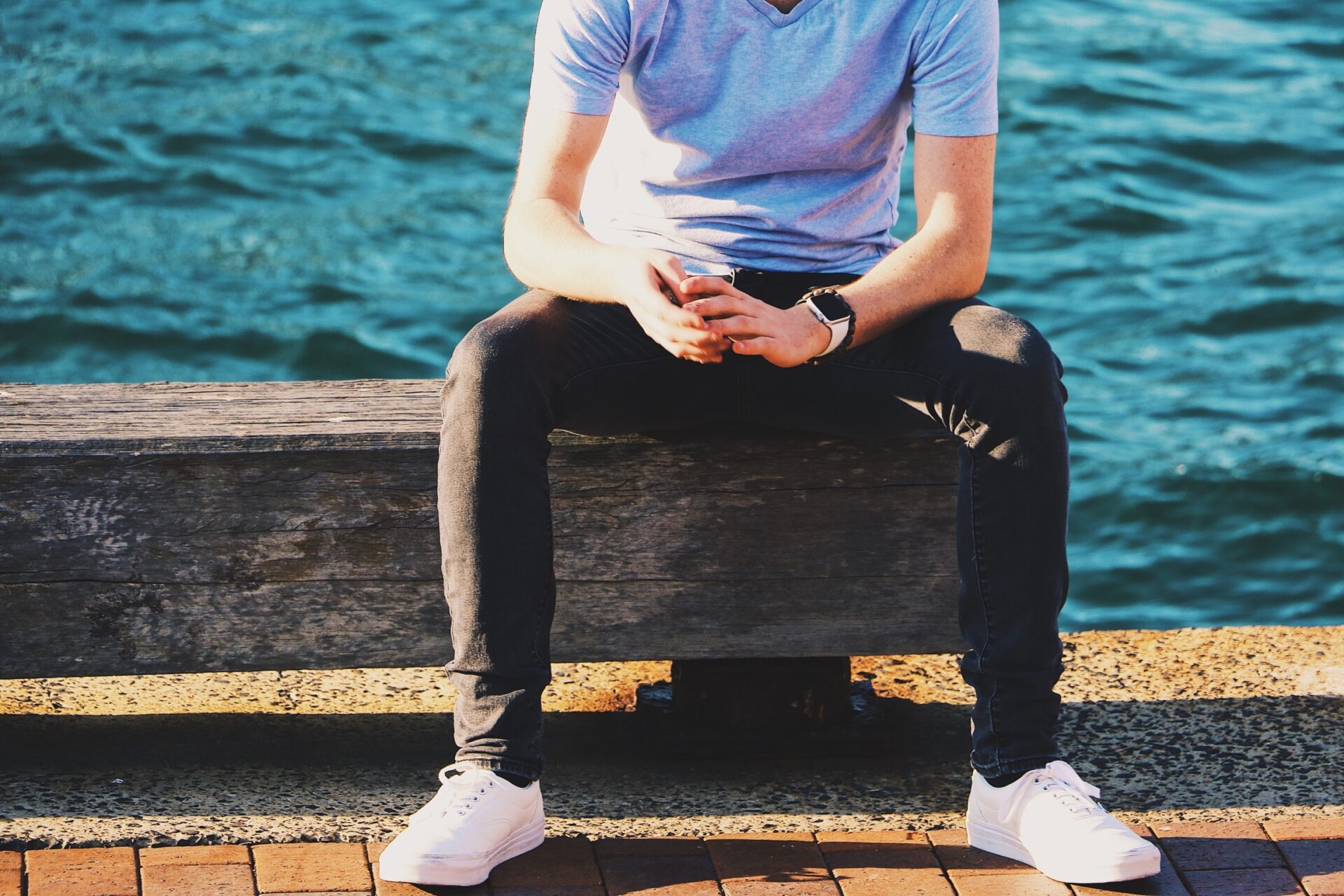 One day there was a man sitting on a park bench. The day was gorgeous, sunny, a little warm but there was a gentle cooling breeze coming in off of the ocean.
In the distance, he could hear the sound of the surf, and the cry of gulls as flew up overhead.
He wasn’t doing anything much in particular, just enjoying his day, enjoying his life as best he could. He wasn’t bothering anyone. But as busy as he was, he just felt like stopping for a moment to just simply relax.
Well, not too long into his rest another man walks up with a smile on his face and a cup in his hand. The other man, roughly the same age as the first, was sharply dressed while the first, was dressed exactly for what he’d set out to do.
But the man came up to the man on the bench and said, ‘beautiful day, isn’t it?’
And the first man nodded, slightly curious about the man and even more so about the cup. But he decides to mind his business and said, ‘Why yes, yes it is.’
The man in the suit asked, ‘Mind if I sit down next to you?’
And the other scooted over and said, ‘Sure, it’s a free country.’
Wel,l the man in the suit did sit. And they sat together in silence for a little while before the man in the suit handed over his cup.
‘I need you to drink this.’
Taking the cup out of curiosity more than anything, and maybe a little thirst the other man asked, ‘What is it?’
And the first man replied, ‘Its poison. It’s going to make you sick.’
Shocked and a little disbelieving the first man chuckled and asked, ‘Why would I drink poison?’
And the first man smiled sweetly and said, ‘If you drink this poison, even though it’ll make you sick, I will like you.’
Aghast, the man – who didn’t know the other from Adam asked, ‘And if I don’t drink it?’
The first man’s face clouded over and suddenly he looked very mean and very angry. And with spittle on his lip,s he replied, ‘If you don’t I will hate you. And I hate you, I could hurt you in other ways.’
Wel,l the first man on the bench, who’d taken some time off just to relax, who’d been minding his own business was naturally really upset that a man he never met could hate him for no reason or want to make him sick just so he could like him.
But finally, the man shook his head and handed his cup back to the man in the suit and said, ‘ You may hurt me, this is true, even kill me. But I will not drink from your cup. You liking me simply isn’t enough of a reason for me not to like myself.’
And without a second though, the man stood up and left the other sitting on the bench with the cup of bitterness in his hand and went about his life.
Furious the man left seated quickly downed the cup and rose to pursue the one who walked away. He made it four steps before his knees gave out and landed face first onto the ground. Dead.
The other – never even knew as he went about his life.

Moral of the story: No one is worth trading yourself for. No one is worth ingesting poison for no matter what the contents of the cup or how much they may like you. Be it religion, politics, and so forth. And while yes, they may be able to hurt you, it’s because they’re ate up inside with hate and their demise isn’t far behind.
And if you have been drinking someone’s poison before, and may still yet be, even though they may grow angry at you for stopping, you have EVERY. RIGHT. TO. WALK. AWAY.

Violence is NEVER the answer. All it does is create a whole myriad and painful questions. Questions like, “Why me?”

What’s worse, is some questions then, have no good answer and because of that – there is are scars that never heal right.

I am so tired of the fucking excuses
friendships, relationships, existence excluded
concluded for what?
are we that fragile
is thinking, now, something frowned upon?
staying true to a person now passe?
is it all relative?
Love is not love that turns its back and walks
stop spreading bullshit – this isn’t a garden

9/10ths of the problems of the world
are rooted in the idea that a person has a right to another
I can own you and can therefore do to you what I want
Whether you’re talking about police brutality
or when people let their fandom that much access to their lives – people will move the fuck in and will take up whatever room you allot them.
Are you for real? Still not clicking in to this?
How about when a grown ass woman – not some nasty side hoe
doesn’t reduce herself, her dreams, her ambition so he can feel needed?
Feel me now?
He couldn’t own her, she wasn’t on the auction block, so he left.

And in my case I stood up for some Jews
those are the fucking people you hate when you WANT
to become a bigot. They’re a racist’s training wheels.
I could have said that a lot nicer
But I don’t pretend to be someone I’m not
There was no ‘welcome to my parlor said the spider
to the fly’ sign on my door
I’ll kiss your ass for the same reason I do your laundry
and that’s only because we’re fucking.

I am sure there are people here
who are tired of being hurt because they put a down
payment on the bullshit someone sold them
and when it started to crumble moved heaven
and earth to make the relationship work
only to find the property was in foreclosure to begin with
but goddamn – the things we’ll do just to hear someone say
they love us
What we trade in for just one more night in their bed
or one more phone call, book sale, a nice word
for what? In fifty years I won’t remember their last names
and neither will you
So stop letting people treat you like their side chick.
all or nothing
no more fucking excuses.

Remember the smell of the water all around you
as stream fed the pond fed the lake that surrounds
and the smell of sun dried earth and freshly cut grass, drift
as a john deer moans across the path and down the hill a ways

its a Thursday, and you’re playing hooky and its summertime
and your young but not in love and so your burdens are light
and your skin is so much tighter, and your smile is still quick to wrinkle your nose
and easy as the warm day resting now upon your shoulders

Twenty one, maybe, no more than twenty three to be sure
open to everything and everyone around you at this tender age
Not knowing that this moment will be recalled days and laugh lines and gray hairs later
as if you were a dusty camera plucked off a shelf in the hands of someone who needs a smile

And perhaps you’ll only revisit this memory once
then again perhaps you’ll come back again and again
when the smell of cut grass, or the sound of water rushing
reminds you of that in between place when a moment you so quickly barely witnessed yet can recall so vividly
so much so you can almost feel the burning of your foot

I’m as needy as you are needy
I’m as boring and frightfully dull
I can laugh till my side aches
And cry when my heart breaks
And I love moments when I’m the king of it all.

I’m as delightful as you are delightful
And I grow sad and so morose about the passing of time
I count gray hairs and crows feet lines
I groan when I see that’s a quarter til five
And I haven’t been to sleep, not a wink, not at all

But of course, I want you to love me
For who I am, I’ll let you know who that is when I know
Cause right now I’m as lost as you are lost
Stumbling forward, crashing, smashing onward ever forward
As Queen once sang, ‘…on with the show.’

I’m as wretched as you are wretched
And I grow more discontent by the day
As i grow older my patience grows thinner
My eyes grow dimmer, Everything grows slimmer
Yet someone forgot to tell my waist

So, yes, Yes! Please, by all means love me!
But understand if I won’t wear a mask for you
I won’t trade myself, place who I am on a shelf
If that means you have to leave
Well, you have to do what’s best for you

For I am as worthy as you are worthy
And there is history behind my voice
But my voice is my own, my opinions full grown
Loving one’s self is a toast to your health
And loving myself is my choice

Do you have that novel in your mind that you’ve always wanted to write?

Do you have that great storyline you think should be made into a screenplay?

Do you have that autobiography you’ve been thinking about sitting down and hammering out now that you’ve reached a place in your life where you have the time?

And, not to toot my own horn, but I love it.

And so did everyone else.

But today as I was reading back over it once more to capture the feeling of the story I am trying to tell I found – before I knew it – in the midst of a black hole of despair.

I was happy all day today.

I got up, kissed my husband goodbye, walked the dog, had breakfast, worked out, caught up on social media, sat down to read and get to work –

I have been published multiple times. I get some pretty good reviews. While I am not the biggest seller out there – I know that at the end of the day – I can tell a story. And a good one at that.

And most days that’s more than enough to keep me going.

But today, I felt like a fraud. A poser. A no good craptastic punk who couldn’t string two coherent sentences together.

When my husband came in, and we had dinner, he noticed I was upset and inquired about it like a good spouse does.

“You go through this every time you write,” he said shaking his head and looking upon me with a gentle gaze of patience.

It is the loneliest feeling in the world to try and create something you’re not 100 percent sure the world wants or will treat well once you’ve handed it over.

I am not going to give you a pep talk, espouse one of those OBNOXIOUS one liners on those OBNOXIOUS motivational posters in offices the nation over. You know which one’s I’m talking about. Those posters that, when you’re having a bad day makes you want to punch someone….yup, them.

I am not going to tell you that what you’re working on is important, that it will be well received, that you will make a million dollars, and your work will one day be taught in universities.

Because all of that may not be true. Hell, it most likely won’t be.

But I will tell you , that feeling you get when you’re up late at night hovering over your laptop, sitting at your desktop, or scrawling through a notebook curled up on the couch – when that moment of terrifying self doubt washing over you – is completely normal.

That’ll mean more than anything.

And if you still don’t feel better go burn one of those fucking posters in effigy.